Shopping Cart
Your Cart is Empty
Quantity:
Subtotal
Taxes
Shipping
Total
There was an error with PayPalClick here to try again

Thank you for your business!You should be receiving an order confirmation from Paypal shortly.Exit Shopping Cart

These kids have trained and have achieved so much in the last few years and are great ambassadors for our community.

There were 1300 entries in each of the tournaments from Australia, new Zealand, Botswana, peru, Fiji and new Caledonia.

Lauren Frost was up first winning a bronze medal in the kata event, it was a tough competition but had her karate instructor by her side coaching her.

Alba Kraatz who is a world judge A in kata coached at the School and University championships, but was informed that this would be the last time she would be allowed to do so because of her commitment to refereeing.

“ At least I got to coach for a short time before resuming my official duties. I guess my role as their karate instructor is to prepare them well enough prior to any tournaments. I have the confidence in them and they never let me down win or lose.”

Lauren had some great fights, mixing it up against bigger opponents winning a bronze medal.

At the Australian Open she fought much better and dominated the fights until the final bout for gold. She did her best but lost in a close fight to win a silver medal.

Brother Bradley fought extremely well to win gold in the junior male division and tried his best in the Kata against much more experience competitors.

In the Australian Open Bradley fought well but had trouble dominating the final bout to win the silver medal.

Leigh Redford won a bronze medal in the fighting, in the dying seconds of the bout he pulled out a reverse roundhouse kick to the head of his opponent to earn him a bronze medal.

It was a great effort from all, they have trained very hard and were rewarded for their efforts. Their next competition will be the Kobe Osaka in Melbourne,

Wade VonStanke also did me proud, he successfully upgraded to National Kata A and now hold a National Kumite A and Kata A license.

Seishikan Karate has dominated in competition in south Australia since 1980 and produced international and world karate champions.

Karate is for everyone it develops a positive attitude built on a strong foundation of self discipline and respect. 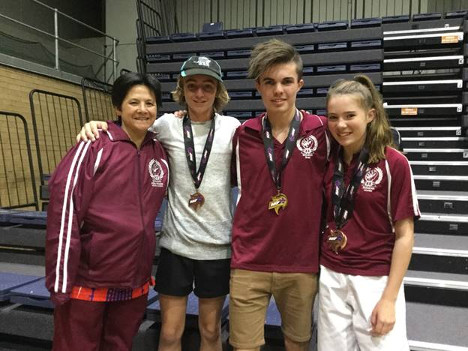 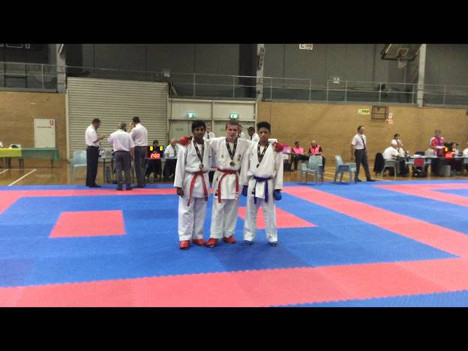 I am writing to you all about the passing of our Kancho, Heiji Tada. We all knew that this going to happen one day but I and several others have been shocked that it finally has occurred.

Kancho was the person with the vision for Seishikan; after World War 2 had left Japan in ruins materially and spiritually, and he began Seishikan with the idea of helping the Japanese people become strong in spirit again.

He was responsible for sending his youngest brother Masao Tada to Australia in 1972 to start the original Seishikan dojo in Adelaide. He was very proud of the fact that we in Australia had continued training and in fact had grown Seishikan from its original dojo for over 40 years.

He was always interested in what was happening in Australia and Tony Barrera has told me that whenever a group of Aussies were heading over to Kyoto to train, Kancho was excited that we were coming.

I was very fortunate to have met Kancho early in my karate days when he visited in 1973, and was extremely excited when he came to Millicent in 1983 and 1987 for two weeks each time. In that time we were also able to get to know Kancho

not just as a karate teacher but also as a man. Kancho was a regular visitor to these shores and alway brought one or two good instructors with him to show us how he wanted us to practise his karate.

He was a very good teacher and when he was here he demonstrated Shisoochin, Seipai and Tensho kata and we could see that he was highly skilled as well.

I think that the greatest thing about Kancho was his wisdom about life which he always managed to impart to everyone who had the good fortune to train in his presence; especially for those who went to Summer camp in Japan.

There are many stories that I am sure we have all heard over the years and whenever I think of them, a smile comes to my face.

He belonged to a generation of karate masters who I think we will never see the likes of again.

I would like to ask you all if you will hold a minute's silence in your classes sometime this week so we can contemplate what we have lost but also what we have gained by practising Seishikan karate.

This year at camp we will also observe this and we will dedicate the camp to the memory of Kancho and what he gave us and I am sure we will relate many stories about him to the class.

I look forward to seeing you all at camp,

The Kongorong Camp is coming up again. Training for senior belts and Black Belt grading. The sessions starts on Friday the 30th of November, then training on Saturday, followed by gradings. We finish up on Sunday with training. This event has been hosted for a number of years by now. Shihan Phil presents this course. So if you're eligible come along. Application forms can be sourced from your instructors. See you there.

Check out the videos and the photos on their respective pages. Seishikan Australia had some students compete on the 8th of July 2012

Sensei Phil Wells passed away on Friday the 8th of June 2012. Phil was a well liked and respected member of Seishikan. He achieved his 4th Dan in September 2011. And was a heavy weight champion in the JKF in the mid 90's. Seven years ago he started the Kongorong Dojo and was its instructor during that time.

Our thoughts and condolences go out to his family and friends in this difficult time. You will be missed Phil.

MondayMarch 12th & Tuesday March 13th –Training to be scheduled at dojo which normally practices on theseevenings. – Training taken by MS

MasaoShihan has indicated he is willing to conduct training during the daywhile he is here.

Please get numbers back to me in the next few days of those who will be attending the Seishikan Australia Seminars. Also we need to know who wants to attend the dinner so that we can decide on a venue. We have a couple of venues in mind, but some are not able to cater for large numbers.

If anyone is thinking about going for  grading, the gradingapplication form (with photo) must be sent to Masao Shihan in Japan for approval. Applicants must be JKF GojuKai members.

Pleaseget your students who are competing to fill out the entry form andsend back to me ASAP.

Therewill be considerable cost involved in putting on these events so itis imperative that we all support them by ensuring as many studentsas possible attend.

For application forms go to the "Application Forms" page. Also check out the Calender

Well the camp came and went. There was about 30 people training over the weekend, and it just gets better each year. After the Friday night sign in it was straight into training. Saturday morning saw us training yet again, and for most of the day. About 5.00 the senior belt gradings happened, and there were many people graded to a high belt. The lowest belt was Shodan (1st Dan) up to an including 6th Dan.

Sunday morning saw us training yet again, and it was all finished around 12.00. And as usual we were all a little sore and tired. Both from training and the usual snorers. Plus a very hilarious and squeeky air pump episode on Saturday night, which had every in tears of laughter. But a good weekend overall.

We are pleased to be able to hold this tournament again in honour of Meiyo Kancho Tada Heiji, the founder of Seishikan.

In 2007 we trialled a new format of tournament designed specifically for junior and novice students.  This year the Ballarat Dojo is pleased to host the tournament again.

I would like to extend an invitation to you and your students to participate this event.

The tournament is scheduled for Saturday 22nd October 2011, and is to be held at the Ballarat dojo.

Please find attached the application form and a poster for display in your respective dojos.

Closing date for the application forms is Friday 14th October but indicative numbers much earlier than this would be greatly appreciated in case I need to arrange a larger venue. Checkout the Application Forms page for the forms

On the weekend members from Seishikan travelled to Caloundra, QLD, to officiate at the 2011 Australian National Championships.

Carl Driesner & Shannon Barton were there in their capacity as coaches of the South Australian team.

Also we had two competitors this year. Josh Smith in Kata and Ben Pascoe-Purvis (Kata & Kumite - I think?)

Also found loitering around the SA team was Dr/Sensei Mark Purvis offering morale and medical support to those requiring it.

On a personal note, Mark tested for and received upgrade to national Kata Judge B.  Having to perform shotokan kata Jion for the practical test in front of a panel of five WKF referees was a bit daunting but he came through the experience emotionally intact Check out the latest photos..